Jesus has the inside track on the what-if’s and then-what’s of Scripture. Want a window from the other side of the grave? Read Luke 16:19-31. There you’ll learn that each person is known by name and earthly history. There is a great chasm between those in torment and those in Abraham’s bosom. Eternal torment, though it creates a sense of urgency for the living, fails to remove the sin nature as evidenced by entitlement and a desire to use others. 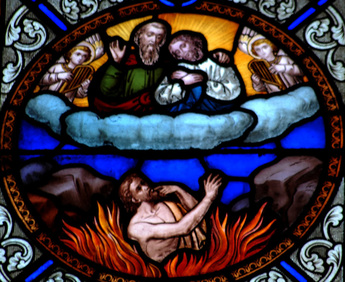 Matthew 12:41-42 gives another glimpse into the other side of the grave. Jesus said this:

Did you catch it? Jesus will judge all (John 5:22). That is His right. His reward. His recompense. He gave His life to pay for our sin. He will sit on His throne and judge the nations. But there are others as well. The earth will vanish. The heavens flee (Revelation 20:11).  In that moment, as He separates the sheep and the goats (Matthew 25:31), it appears those standing by will condemn the wicked.

There is no record that others will say or do anything in that moment, but the fact that their lives demonstrated equal or greater opportunity to do evil–and they repented–is condemnation. There was a choice. There were options. Child abuse, alcoholism, neglect, lost employment, financial stress, missed opportunities, bullying–none of these are excuses for wickedness, rebellion, striking out against others. None of them justify tormenting, exercising power, or belittling another. A bad day at work, a broken car, late appointment, missed phone call–we all choose how we will respond. To strike out against God and His image is wrong. It is sinful. And it will be condemned.

Who condemns? The One who willingly paid the price. The One who offers freedom from sin and self. The One who agonized in prayer, shed blood, and gave His life. He sits–has sat, human generation after generation–on His throne, extending mercy and forgiveness, free of charge.

There will not only be Divine justice in the last day, there will also be human justice. It will not happen in a vacuum, but in front of total humanity of all time. You and I will witness fully exercised justice: human and Divine. Daily life may not reflect the reality of future reckoning, but it is there, just the same.

God is not bound by time the way we are. He is the “I AM,” ever present; at the beginning, middle and end simultaneously. He has already weighed each one in the balance. Justice is served. It is a “now” in God’s perspective though it seems slow coming. It is certain. It will be swift. It is eternal.

How should we respond? With gratitude, prayer, sober judgement. We live under the gaze of the I AM: fully aware of His presence, dependent on His grace, demonstrating faith in our thoughts, words, and actions.

“But when the Son of Man comes in His glory, and all the angels with Him, then He will sit on His glorious throne. All the nations will be gathered before Him; and He will separate them from one another, as the shepherd separates the sheep from the goats; and He will put the sheep on His right, and the goats on the left.

“Then the King will say to those on His right, ‘Come, you who are blessed of My Father, inherit the kingdom prepared for you from the foundation of the world. For I was hungry, and you gave Me something to eat; I was thirsty, and you gave Me something to drink; I was a stranger, and you invited Me in; naked, and you clothed Me; I was sick, and you visited Me; I was in prison, and you came to Me.’ Then the righteous will answer Him, ‘Lord, when did we see You hungry, and feed You, or thirsty, and give You something to drink? And when did we see You a stranger, and invite You in, or naked, and clothe You? When did we see You sick, or in prison, and come to You?’ The King will answer and say to them, ‘Truly I say to you, to the extent that you did it to one of these brothers of Mine, even the least of them, you did it to Me.’

“Then He will also say to those on His left, ‘Depart from Me, accursed ones, into the eternal fire which has been prepared for the devil and his angels; for I was hungry, and you gave Me nothing to eat; I was thirsty, and you gave Me nothing to drink; I was a stranger, and you did not invite Me in; naked, and you did not clothe Me; sick, and in prison, and you did not visit Me.’ Then they themselves also will answer, ‘Lord, when did we see You hungry, or thirsty, or a stranger, or naked, or sick, or in prison, and did not take care of You?’ Then He will answer them, ‘Truly I say to you, to the extent that you did not do it to one of the least of these, you did not do it to Me.’ These will go away into eternal punishment, but the righteous into eternal life.” (Matthew 25:31-46)